In September 2020, the U.S. Chamber of Commerce launched the U.S.-Kazakhstan Business Council (USKZBC) with the goal of advancing economic and commercial cooperation between the United States and the Republic of Kazakhstan.

Trade between the United States and Kazakhstan stands at approximately $2 billion per year, with ample room for growth in sectors such as agriculture, energy, mining, and infrastructure. The Council will carry on the mission of the former U.S.-Kazakhstan Business Association (USKZBA) through an enhanced business and policy platform. Chevron, the largest investor in Kazakhstan, has been named Corporate Chair of the Council and will help advance the business community relationship in the country, which is home to more than 700 U.S. companies.

Kazakhstan’s Ambassador to the United States, H.E. Erzhan Kazykhanov said of the launch, “We regard the launch of the USKZBC in the U.S. Chamber of Commerce as a historical event that gives a strong impetus for enhanced Kazakhstan-U.S. trade and economic partnership and create jobs and opportunities in both countries. As a leading economy of Central Asia Kazakhstan remains a reliable partner of the United States and stands committed for mutually beneficial cooperation with the U.S. companies.”

The Council will be housed within the Middle East, Turkey and Central Asia Affairs Department, led by Senior Vice President Khush Choksy. The program will be headquartered in Washington and leverage the U.S. Chamber’s Regional Office-Istanbul and the American Chamber of Commerce in Kazakhstan to help U.S. companies expand their presence in Kazakhstan through high-level meetings, policy advocacy, business missions, market intelligence, and networking. 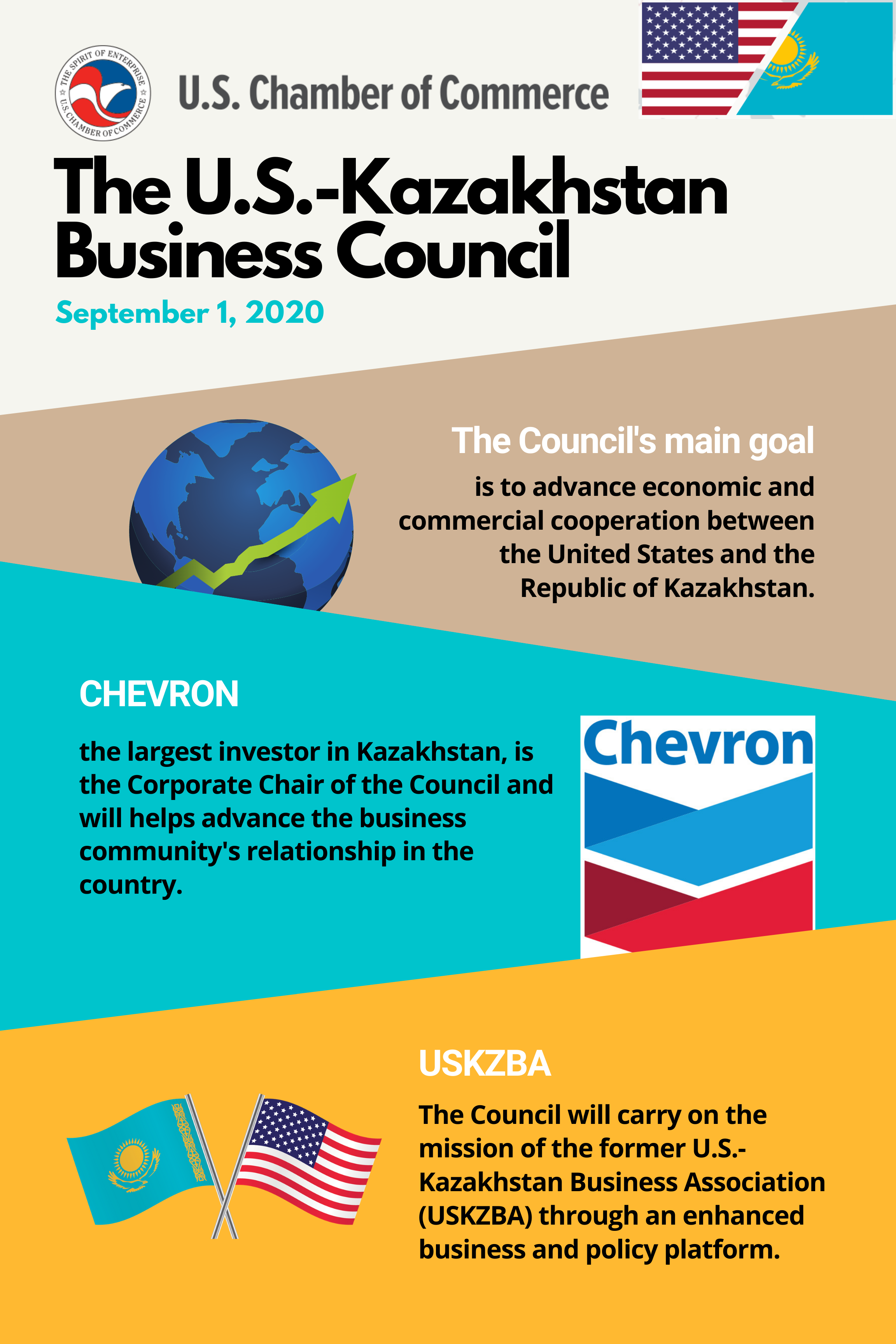 On Sept. 9, 2020, the U.S.-Kazakhstan Business Council held its first advisory board meeting with member companies. The meeting kicked off with Chamber’s Senior Vice President of Middle East, Turkey and Central Asia Affairs Khush Choksy’s remarks, followed by Council Chair Amy Conroy of Chevron and Council Board Members from Citi, ExxonMobil, Fluor, Mastercard, and Shell. The Council members discussed the proposed 1 year work plan presentation by Chamber’s Executive Director, Jennifer Miel. The members provided feedback and priorities for the newly formed Council’s next steps in enhancing the bilateral relations between U.S. and Kazakhstan.