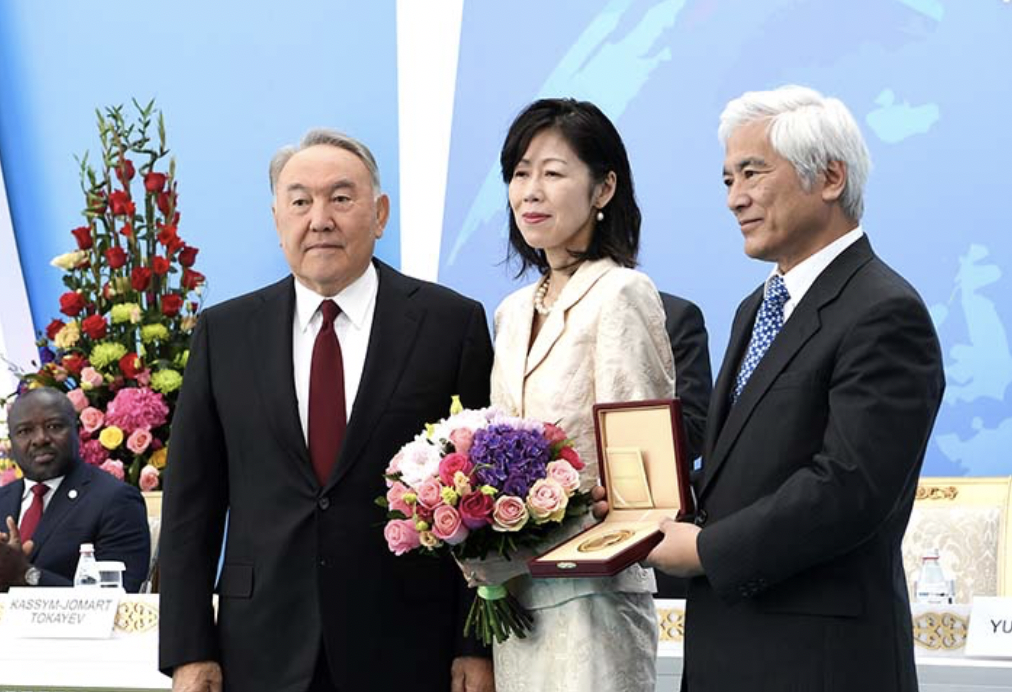 My elder brother Yukiya passed away on July 18.  Before he died, he was told that he was chosen as the awardees of this highly prestigious Prize, and he was truly pleased with this great honour.

Throughout his career, he had a number of occasions on which he had the pleasure of meeting with the First President. He was deeply impressed and moved by the determination and passion of the First President towards the nuclear disarmament and its elimination from the Earth. He immediately came to pay high respect to him. From time to time, he told us that he has a good chemistry with President Nazarbayev, whom he felt as a true comrade.   In mid-June my brother came to Japan to have yet another medical check, and the results were not at all good. Since then he came to wish to survive till the International Day against Nuclear Tests so that he can come to Nur-sultan to attend this ceremony, and to see the First President once again.   My brother served as a Japanese diplomat for nearly 40 years. In the autumn of 1994, Mr. Yohei Kohno, then Foreign Minister of Japan and the father of current Foreign Minister, took an initiative to propose a completely new UN resolution on total elimination of nuclear weapons. Triggered by the experience of drafting this resolution, my brother found the issue of nuclear disarmament and the elimination of nuclear weapons his life-long mission.

Fortunately, this resolution on total elimination of nuclear weapons has been adopted by the UN General Assembly for 25 consecutive years now with only small modifications year after year.   I will not continue on my brother’s contributions in the nuclear disarmament and non-proliferation since many of you here knows about it. As a Japanese diplomat myself, I take high pride in my brother. At the same time, I feel a bit jealous of him, because he was able to find an area of expertise that is worth spending one’s whole life.   Thanks to your friendship, he could complete his life very happily. For that, I thank you on his behalf.